Belts during this time period are not particularly complex. For the most part, a belt a few inches longer than your waist, with a simple buckle, will do just fine, especially for men. Such a belt would not have a "keeper" - that little circle of leather meant to keep the extra length smooth along the belt. The picture shows a belt fragment, still in a knot, with a buckle; it was found at an archaeological dig.

Many people in the SCA wear belts that have a long tail hanging down from the belt near the buckle. If you want to wear this style, a belt with a buckle works the best. Loop the extra length behind the buckle area so it will hang straight. The way the belt is looped in the small drawing to the far right is the most common way among SCA people. The tail of the belt should be shorter than your tunic.

You can buy belts in almost any menswear department, out of many substances that resemble leather. If you want one that hangs down, shop in the Large Men's or Large Women's departments; they sell sizes that will give you more than enough length. You will have to punch extra holes in these. You can also find leather belts without buckles at Tandy Leather; they sell buckles also.

The other thing that is useful for SCA garb is a pouch. We need someplace to carry our authorization cards, driver's license, car keys, etc. The belt pouch is one way to accomplish this. Many ladies forgo the pouch and carry a basket instead; it holds more and doesn’t weigh down your belt.The basic belt pouch can be made out of leather or fabric. The drawstring pouch uses a U shape of material, sewn along the bottom and edges, and with a drawstring at the top. You can make buttonholes or a casing for the drawstring. If you are inclined to get fancy, you can line it or decorate it. 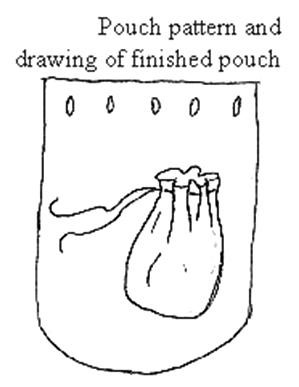 A later version was certainly worn by men and is also easy to make. Take a rectangle of material about 7" x 16"; fold it in half with right sides together to make a square and sew up the sides. Turn right side out. Fold the raw edge up 1”, then fold it up another 1” so the raw edge is enclosed and sew about 1/8” in from the edge.

In the center back, sew a finished loop of material to make a belt loop. The loop should be about 2" wide by a little taller than twice the width of your belt. Sew it to the pouch firmly at the bottom of the loop and also at the top edge of the pouch Cut a piece of ribbon or leather lacing that is 20 to 25” long. Make button holes in the upper pouch for the drawstring, four on the front and four on the back. Thread the drawstring through the holes. If you pull the drawstring up slowly, pleats will form. 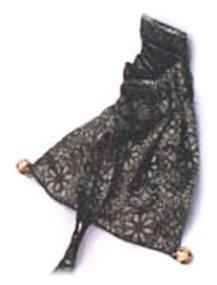 Another option for a pouch looks like an envelope with a large flap that can be decorated with embroidery and loops for your belt.